How to File Defamation Case? Proof, Evidence, Essentials and Defence

How to File Defamation Case? Proof, Evidence, Essentials and Defence 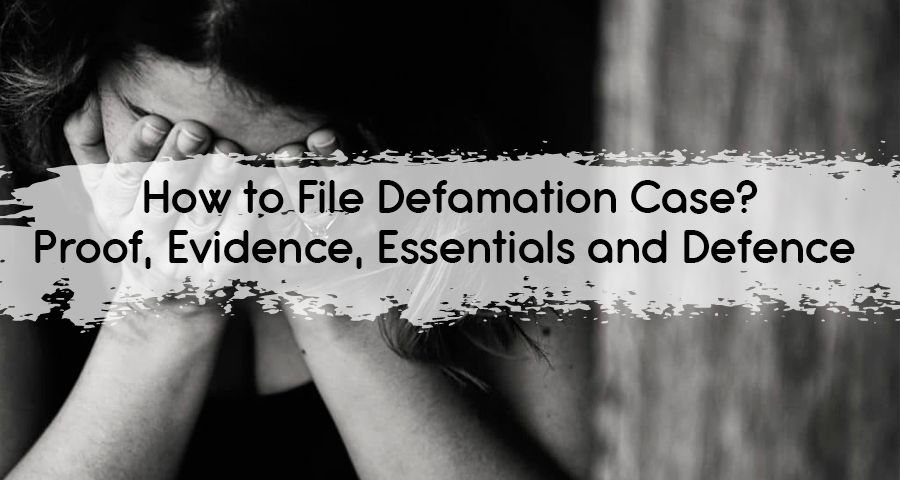 In simple law terms, Defamation is attacking another humans’ reputation or integrity by an un – true statement or publication which is intended on bringing the person’s self – respect and reputation down.

A person’s reputation and honor are considered as his property under the law and he can file case against anyone who damages it and they will be held accountable and punished. Defamation’s history dates back to the ancient German and Roman law where any chants that were deemed abusive were punished. The had punishments where the tongue of the offender was cut. For any statement to be of defamation nature it can either be in written or verbal.

The two types of Defamation are LIBEL and SLANDER. If the said defamatory statement is spoken or shown in gestures it is called as Slander and if it is in an enduring and lasting form like writing or in the form of pictures or Art then it is called Libel.

Article 19 of the Constitution of India lays down the rights of freedom to all Indian citizens. In spite of that, Article 19(2) has put the restriction to it by stating that the freedom of speech has some reasonable limitations. Contempt of court, incitement to an offence and Defamation are the few exceptions to freedom of Speech mentioned under Article 19(1)(a).

It states that anyone who defames anyone will be given prison time of up to two years and will be fined.

How to Prove Defamation in Court?

To Prove that the Defamation has taken place the plaintiff should submit four main things. They are

i. The false statement which has been claimed as a fact.
ii. The communication or the publicizing of the derogatory statement to a third person.
iii. The damages that the plaintiff against whom the statement has been made.
iv. Negligence has been amounted by the fault.

The evidences involved in a civil defamation suit are of two types, Direct and Circumstantial.

Direct evidence is when the evidence supports the derogatory statement without the need of negotiating for a conclusion.

Circumstantial evidences are simple facts when proven will lead to another fact. This is the most common type of evidence. There are four other forms of evidences in defamation cases.

Testimonial evidence -> written or verbal evidence given under penalty/perjury in front of the court; Physical evidence -> this is also known as real evidence which can be seen, felt and touched; Documentary evidence -> documents or writings presented in court and Demonstrative Evidence -> illustrations or representations of other evidences submitted in court.

Not everything spoken or written will be considered as defamation. Certain essentials are laid down which determine if a statement is derogatory/defaming or not.

Firstly, the statement made should be defamatory i.e., it has to harm the self-respect of the victim by damaging their image and manifesting him to dishonor. Any statement might look normal at first but will have a second meaning, such statements will also be considered as defamatory. This is known as Innuendo.

Cases filed for defamation also have certain defences. They are as follows:

1) The defendant can prove that the statement made was in fact true. This is an absolute and complete defence. This defence can be utilised even if the intentions were bad.

2) The statement which was made was fair in form of an opinion and has been made with respect to the public interest. For this defence the defendant will have to make sure that the statement given is based on facts and people who see or read the statements priorly know the facts. The said facts also should be true or else the defendant will be held liable. Matters relating to public interests are for the health, well – being, safety of the community, government, economy etc.

3) At times the comments made are privilege in nature as this will exceed the right to reputation. This privilege is of two types; Absolute and Qualified. Absolute privilege is when the statements made will not be held liable however harsh or derogatory, they might be. They will be protected under the context of public interest. Qualified privilege is when anyone makes any statement in a good intention only and not to defame the plaintiff.

The concept of reputation, self – respect is considered as an asset for every human and no damage or pain must be inflicted on it. Therefore, the Indian law has laid down all these provisions, essentials to make people who defame others liable and experience the punishment. However, to interpret the law it is best advised to get legal help. Adv. Bindu Dubey is one of the finest defence lawyer available in Mumbai. She has handled many defamation cases and will guide the client clearly and smoothly.