How Legal System Protects and Honours the Senior Citizens in India?

How Legal System Protects and Honours the Senior Citizens in India? 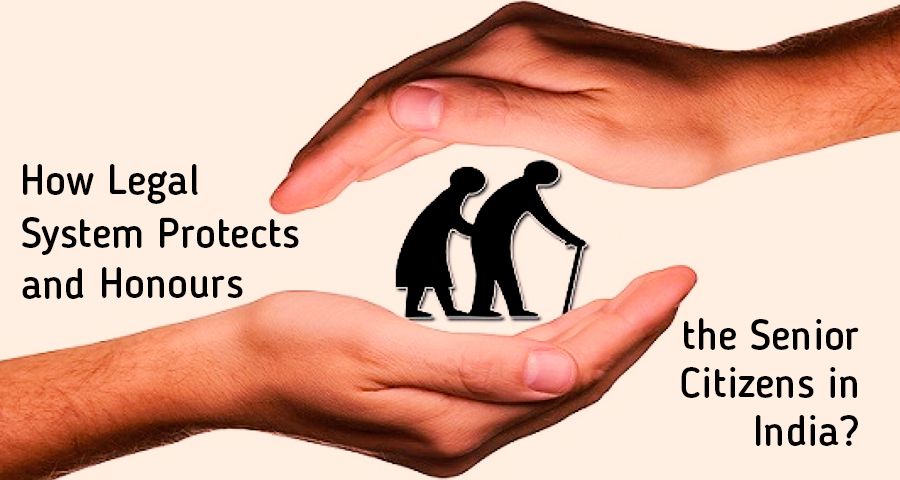 The main idea and concept of Indian Tradition and culture is that everyone must respect our elders, seniors irrespective of whoever they are. It is our responsibility and duty to listen and obey our elders. This is said because it can be seen that the elders have more experience and they will guide us by helping us not going into the wrong. In return for such wisdom that they impart on us it is our duty and responsibility to take care of them and provide for them when they become old and have it hard. We must ensure that they live with dignity and the respect that they deserve. Especially in recent times where many of the senior citizens are forced to live separately and lonely from their children. This pushes them into the defenseless and helpless situations in life mainly with the advancement in technology and innovations.

The Constitution of India has mentioned in the Articles 41 to 46 where it states the directive principles of state policy where they have laid provisions and laws for giving work and common assistance for the elderly and to promote the economic interests of the elderly section of the Indian society.

Article 41 states “The State shall, within the limits of its economic capacity and development, make effective provision for securing the right to public assistance in cases of old age.”

If anyone feels their right has been violated can approach the judiciary and this will be done with the help of advocates. Adv. Bindu Dubey is one of the finest lawyers in Mumbai who is fully capable of helping the clients with issues relating to maintenance for senior citizens.

The ‘MAINTENANCE AND WELFARE OF THE PARENTS AND SENIOR CITIZENS ACT OF 2007’ was enacted to provide for the senior citizens. The main objective for the drafting and enacting of this Act is that, statistics showed how the cultural and traditional values were decreasing in the Indian society. This led to the breaking of the joint family system in India which force the old citizens to live alone. This Maintenance and welfare of the parents and senior citizens Act of 2007 lays out and issues the maintenance aid and finance to the senior citizens and elderly parents. This Act of 2007 holds seven chapters and thirty – two sections. Various needs, necessities, disposing of matters in the best interests, establishments etc. have all been mentioned in this Act. The rights that are all promised and vowed under the Constitution of India has also been mentioned in this Act by connecting senior citizens and basic rights. For example, the RIGHT TO EQUALITY as stated by the Indian constitution which is a fundamental right and, in this scenario, the ‘social security’ of the senior citizens are the responsibility of the district, state and central government. There was an amendment during 2016 which laid out the path for all the dependent people of India irrespective of their age and gender. This Act states that anyone who has been denied the ability to have or use a bank account because of their age, disease or disability will be included in this Act. For these categorized people mental and physical health will be provided.

The maintenance for senior citizens and elderly parents stated under this Act will be the duty and mandatory obligation for the child of the elderly persons who in return benefit the inheritance as under the statutory Legal system or respective personal laws. If the mentioned persons fail to perform the duty of serving the senior citizens or elderly parents then they will be subjected to punishments. With the 2016 amendment the penalties were made extra strict where the prison time extended up to five years and the fine up to one lakh or even both at many instances.

This Act has defined parents under Section 2(d) as anyone biological, step parents or adoptive parents. The age of the respective parents is out of question here as they can claim maintenance at any age. The Act defines ‘Grandparents’ as both paternal and maternal side grandparents. Senior citizen has been defined under Section 2(h) as anyone above the age of sixty. The Act also defines Children under Section 2(a). This maintenance and welfare of parents and senior citizen Act of 2007 states that maintenance is the providing of not only finance but also food, daily necessities, medical help and other important things for daily livelihood. This will be provided by default for all senior citizens. The only and main constraint or requirement for claiming such maintenance is that the elderly person should be in – capable of taking care of themselves with their properties or income. The question as to who will pay the maintenance arises and the answer for this is that all adult children, grandchildren irrespective of the gender will have to pay the maintenance. A case can be filed under this Act against the obliged person. Senior citizens who do not have children will be allowed to claim maintenance from any relative who has been chosen by the senior citizen to inherit their properties. This relative should not be a minor and should have the capacity to give maintenance. In cases where more than one relative is said to inherit the properties then maintenance will be given by all of them in the mentioned proportion of the inheriting share.

This Act states that the highest maintenance that will be given to the senior citizens is Rs. 10000/- per month and it will be stated by the requirement of the claimant and the main objective it to make the elderly people live a normal day today life. The filing for maintenance will be done under nay tribunal where the parents, grandparents reside, previously lived or where the person who is supposed to provide maintenance lives. After the courts pass an order the maintenance provider must deposit it within thirty days. If failed to do so they will receive a warrant as warning and even after that they fail to pay it then they will be forced to pay fine or even be punished with imprisonment. The state government has the responsibility to take care that all hospitals that are partially or fully operated by the by the government should allocate beds for all senior citizens. Section 19 of the Act states that every district must have a fully functioning old age homes which provides security for the elderly people.

Under the Hindu, Muslim personal laws there are various provisions which states that elderly persons must be taken care of by children. Section 125 of the Code of criminal procedure makes it mandatory for children to maintain and look after their aged parents. Taking care of our parents, grandparents or elders is a moral and ethical duty for every young people. The legal system of India also plays a part in it by placing various laws and provisions which takes care of the Elderly. All these laws have also proved to be very effective.